It was an early morning in 2014, when Mark Brindle, a member of the Berkeley Staff Governing Council, attended a Chancellor’s breakfast to fill in for a colleague who had the flu. That breakfast, believe it or not, turned out to be a catalyst for the creation of the Staff Alliance for Disability Access (SADA), a collaborative and supportive campus staff organization that addresses the needs of UC Berkeley staff members with disabilities.

The Chancellor’s Breakfast is an opportunity for staff organizations to meet, greet, and discuss ideas with the Chancellor. 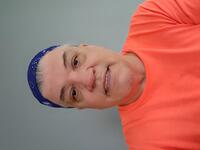 A woman representing staff with disabilities spoke at the meeting, about lack of ramps and accessibility, and other issues she and her colleagues were facing on campus. Mark was very surprised and disappointed to hear this. “In the United States we have one of the largest populations of disabled people, but seem to get the least advocacy.” says Brindle. “They didn’t pass the ADA laws until 1990, and that’s a shame. Up until 1990 you had state laws where people with disabilities couldn’t own property. If their parents passed away and their parents were rich, they become wards of the state. That’s crazy to think that happened as early as 30 years ago!” (Mark Brindle, pictured on the right is a Telecom Technician in Business Operations, and a founding member of SADA).

The Start of Something Good

Mark connected with Lucy, and Lucy brought in Derrick Coates, Manager of Disability Program Access. Together, they decided the best way to help disabled staff get the resources they need was to start a staff organization. To do this, they had to get a sponsor, a list of people to sign off, and an approved charter.

Derrick and Lucy, both working in the accessibility field, have a great network and therefore knew the right people to contact. Mark was a voice technician, who worked on campus and had a company vehicle. “Derrick and Lucy would do all the emailing and letters, and they’d tell me who to go talk to.” said Mark. “Since I made rounds every day, I was able to chat with everyone. That’s what I did, nag people. It was tough!”

Jo Makness, who was interim Vice Chancellor for HR at the time, heard about Lucy, Mark, and Derrick’s efforts and called them in for a meeting. She gave them a sponsorship and a budget right on the spot, and SADA began (in 2016). ”To this day I’m really thankful to Jo for helping us out with that.” says Brindle. “That’s what gave SADA their start.”

The Current State of SADA

When SADA first started, the goal was to increase disability access. Since then, SADA has become a community of people committed to: supporting disabled staff members in their professional progress, advocating for the recruitment, hiring, retention, and promotion of staff members with disabilities, promoting a safe, accepting, and welcoming environment on campus for staff with disabilities, and so much more. “SADA is a great place for your management team to go and learn things.” says Brindle. “We do webinars, we record them, and we put them on our website. We hosted a well attended webinar on working from home for persons with disabilities when COVID first started. Management can also contact us with other ways to connect or for more resources.”

SADA is currently open to all staff and they have general meetings every three weeks. Email sada@berkeley.edu for more information.