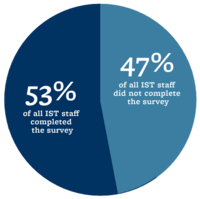 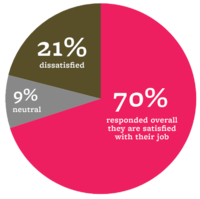 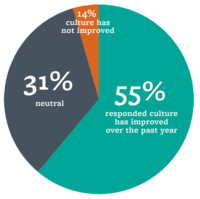 The original survey conducted in May 2018 was created using a series of already validated and reliable scales from scientific research. The pulse survey was created by analyzing the data from that first survey in order to select questions that would provide reliability for each scale even though the scales were being shortened. Statistical analysis on the pulse survey data shows that all major scales were reliable.

As a whole, the pulse survey shows positive change:

However, the percentage of respondents who would recommend IST as a great place to work has dropped from 80% to 68%, and levels of job satisfaction have declined by 14%. This is not surprising - while the last year has included a lot of projects focused on positive change, it has also included a lot of messaging as to why change was needed. People who may not have been aware of bullying in the previous survey, for example, are now aware it occurs in their workplace and are likely to be less satisfied. Further, as the organization gets its footing in new ways of doing things the environment feels uneasy, and, let’s face it, change is hard and requires more work.

Committed to a positive, welcoming, and inclusive workplace.